That Time I Woke Up At 2:00am To See A Live Tuna Auction

I adore Sushi, Sashimi, Nigiri oh and even the trendy sushi we make in America with ingredients to appeal to western tastes.  Did you know that in Japan they put the wasabi on the sashimi itself and not on the side?  They say to never mix the wasabi in your soy sauce as it ruins the soy sauce and the wasabi.  It should be separate.  I am assuming they don’t put it on the rolls itself because we aren’t use to it in America.

When I went to Tokyo there were two things involving fish that I really wanted to do.  1 being go to Jiro’s restaurant from Jiro Dreams of Sushi.  Jiro Ono is an 85-year-old sushi master and owner of Sukiyabashi Jiro, a Michelin three-star restaurant. Sukiyabashi Jiro is a 10-seat, sushi-only restaurant located in a Tokyo subway station. Jiro Ono serves a tasting menu of roughly 20 courses, for a total of 30,000 Japanese yen ($281 USD).  They are suspecting he will retire in the next 3 years.  Unfortunately the wait is 9 months so will have to come back to Tokyo ASAP.

2nd, was to watch a live tuna auction at the Tsukiji Fish Market. The market is a large wholesale market for fish, fruits and vegetables in central Tokyo. It is the most famous of over ten wholesale markets that handle the distribution of food and flowers in Tokyo. Tsukiji Market is best known as one of the world’s largest fish markets, handling over 2,000 tons of marine products per day. I am sure you have seen the high end restaurants boasting about getting their fish from this market.

The sight of the many kinds of fresh seafood and the busy atmosphere of scooters, trucks, sellers and buyers hurrying around, make Tsukiji Market a major tourist attractions. In fact, the numbers of visitors have increased so much over recent years, that they have become a problem to the course of business, as the aging market’s infrastructure was not anticipated to serve as a tourist spot. 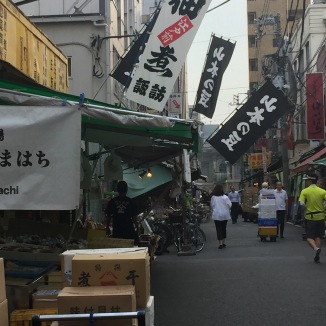 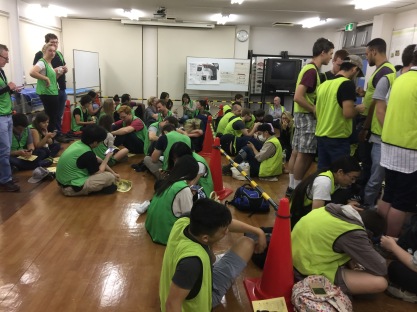 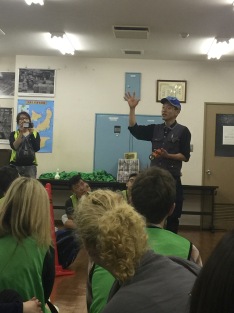 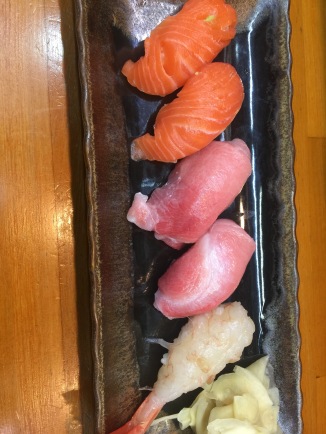 Each day that they are open they have about 1,000 tuna for sale.

The 700 bidders get 30 minutes to check out each tuna to see if they want to bid and for how much. They are bidding on Blue fin, Big White and Yellow Fin tuna that is Fresh and frozen.

I assumed frozen would be not as high of quality too.  Tuna boats can freeze the tuna to -60 degrees so the fish is fresh for 2 years. The boats can freeze 3k-4k tuna and are typically out for a whole year. Fresh tuna is what fisherman caught a few days ago and freeze.

They choose 10 fish they want to bid on and max prices.  The guy we spoke to said he gets 1 in 8 wrong which leads to a lesser profit margin.  Because the taste of sushi is hugely dependent on the quality of the fish, it is important to get the bidding right. He typically gets 30% profit.

AUCTION!  This is the fun part.  There is organized chaos and excitement in the air. 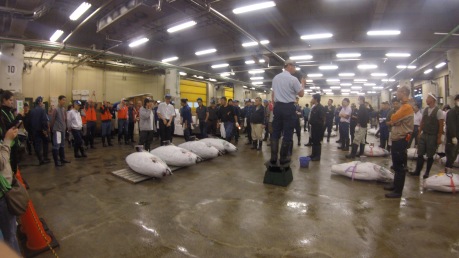 Fun Fact:  The first auction every year is the most expensive to celebrate the year. $1.5 million US dollars is most expensive tuna sold 4 years ago.  Many news outlets attend this event so the restaurant used it as publicity.

The tuna is loaded onto a truck and taken into nearby wholesale store. The wholesale store takes the fish and cuts to sell to restaurants, people, hotels etc.

Tuna can be divided to upper, middle and lower sections. The belly is fattier, lower is less fatty and the upper part is more.  The upper part is the most expensive and lower part is less.  Average cost is $200 per kg for upper and $60 usd per kg lower.

Tsukiji Market may be moving in the near future because of the 2020 Olympics.  This isn’t confirmed but is in the works.  It is suspected that the market will be much different and won’t have the same character or feel.  If you are in Tokyo, get yourself out of bed early and make it to a tuna auction.  You won’t regret it.

I feel lucky to have gotten to experience this unique event and taste nigiri straight from the market.  I also think it may have set the bar pretty high for my tastes in America now.