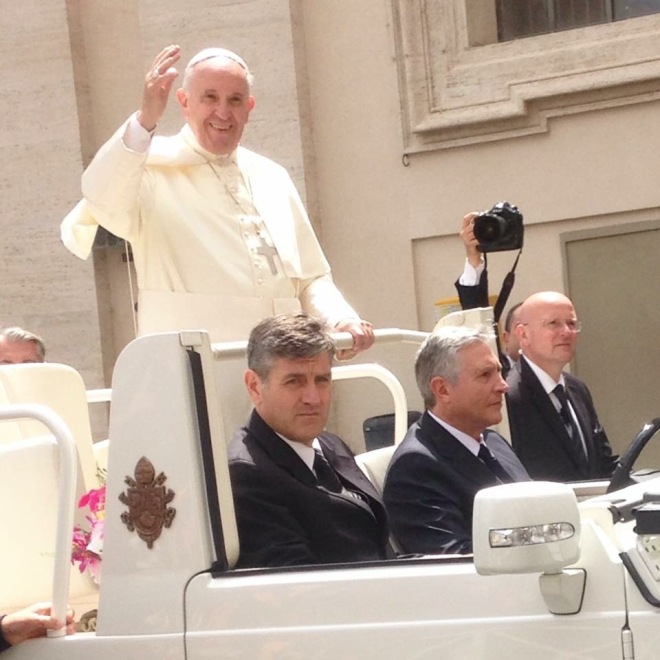 When I was traveling throughout Italy with my friend Susan; the Vatican, Sistine Chapel and St Peters Basilica were all on our must do’s and we were not let down. The day we were leaving, Susan’s aunt had called us to tell us we should go to the Papal audience and she will get us in VIP to meet Pope Francis.

Papal Audience are held on Wednesdays if the Pope is in Rome, giving pilgrims and visitors the chance to “see the Pope” and receive the Papal Blessing or Apostolic Blessing from the successor of the Apostle Peter during their visit.

As someone that is not Catholic I originally wasn’t sure if I wanted to do this, however I love Pope Francis and think what he is doing for Catholicism is huge.  We decided to skip our train to Florence, leave our bags at the St Regis and hop in a cab to meet the Pope.

Her aunt spoke in Italian to our cab driver to explain to him that, yes, they will be going through the back gate through the Popes private entrance.  The whole time we were thinking there was no way we are suppose to be back here and that we may get arrested.

We drove through the back entrance past the Pope’s living quarters and the Pope Mobile and were just dropped off by the guards.  The Swiss guards just stared at us and we were nervous as we were told not to move to fast or they would attack us.

We stopped at the security office and the security officer mentioned that our names weren’t in the system and he didn’t know who we were and that we would have to leave.  We immediately started backing up as we knew we also shouldn’t be there as well. Joe Biden had just walked out of the office if it gives you any reference.

Her aunt called the security guards personal line to let him know we were suppose to be there.  The head of security came to get us, brought us through the door that the pope goes through and into the 45 person VIP audience with the brides being blessed, speakers and dignitaries.

We sat down and realized there were 25,000 people in St Peters square and that we were extremely lucky and blessed to be in the situation that we were in.

The Audience with the Pope consists of small teachings and readings mainly in Italian but also in English, French, German, Spanish, Polish, Portuguese and sometimes other languages depending on groups visiting.  The Pope will do a greeting in each language and special visiting groups, Choirs etc from various countries will get a mention.  At the end of the Audience the Pope will pray together with those attending the Audience, the Our Father prayer in Latin. At the end of the Prayer as Head of the Catholic Church he will impart his Apostolic Blessing upon the crowd which also extends to loved ones that are sick and suffering and blesses any religious articles such as rosary beads that people have brought with them for the purpose of the blessing.

At the end of blessing the pope went around the VIP area to do the blessing of the brides whom were all in their white wedding dresses.  One of the brides threw up all over herself when she was getting blessed she was so nervous.

We were extremely lucky because after the papal audience we were able to walk through the holy door which is only open during Jubilee years.  “The Holy Door will become a Door of Mercy through which anyone who enters will experience the love of God who consoles, pardons, and instills hope.”

Everything about the day from the clouds opening up every time the Pope spoke to the positive and peaceful energy throughout the square made this a truly magical and memorable experience.